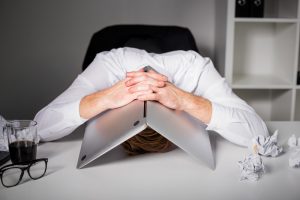 Data security is something every organisation of any size needs to think about. Whether you’ve got a few client files locked in a store cupboard or a multi-premises operation linked via sophisticated technology, everyone is at risk.

And the scariest thing is that because the majority of us aren’t data security experts, we very often don’t even understand the problem, let alone the solution. These five rather startling facts are a great indicator of how big the problem is.

1) Your photocopier is spying on you

Your photocopier keeps records of everything you’ve ever printed or copied (yes, even those unfortunate anatomical pictures from the office Christmas party). If the hard drive isn’t properly wiped or destroyed once you’ve finished with it, you could find your sensitive data falling into the wrong hands.

2) There are way more viruses than you think

During just one three month period last year, 18 million new malware samples were captured by cyber security experts Panda Labs. Which works out at around 80,000 every working day. And that’s just the ones they found.

3) Your staff may not be a as tech savvy as they think (and fibbers!)

One recent study by a German university sent mock phishing emails to a group of people who had previously professed to be aware of these kinds of scams. 45% of them clicked on the link in the fake email. And only 20% admitted that they’d done it. Let’s face it, the others were probably a bit embarrassed.

Ponemon and IBM do a study each year, looking at the cost of data breaches across several countries including the UK. Last year’s report showed that the costs associated with a data breach have gone up by 29%, from an average of £2.37 to £2.53 million. Which is probably not the kind of money you have lying around in case of emergency.

5) Data loss can kill you

Ok, we may be slightly exaggerating that one, but it could kill your business (and if you’ve got a dodgy ticker then actually, there is a bit of a risk there too). In fact, more than 60% of companies never recover from a major loss of data. Not only is there the actual monetary cost to consider, but major data loss can also severely damage your reputation, so that future work is threatened.

Anyway, before we have you reaching for the gin bottle, there is some good news. Because forewarned is forearmed, and if you anticipate the possible data issues you might face then you can at least take steps to try and prevent them.

For example, make sure your paper records are stored securely, that your digital records are suitably protected, that your staff are well trained and trustworthy, and that any waste is securely destroyed.

Scan Film or Store can help with quite a few of these issues, so if you’re worried about your data security then give us a ring today.