Home / Blog / Electronic data destruction – how not to get caught out

Electronic data destruction – how not to get caught out 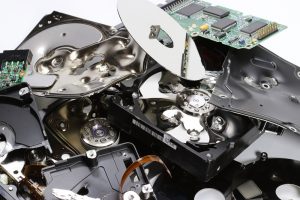 So you’ve had a bit of an office clear out (well done for getting everyone involved – which of our tactics did you use?) and now you’ve got some stuff you need to get rid of. A few (million) boxes of old paperwork, a stack (or several) of redundant CDs, a couple (ok maybe more) of laptops that are beyond repair, enough promotional USB sticks to build a scale model of the Eiffel Tower (there we go).

You’re not so naive as to chuck the paperwork in the bin where any old Nosy Nelly could have a snoop at it. After all, it might not contain the blueprints for a secret underground lab but with GDPR agents lurking behind every water cooler (NB this may be an exaggeration) you don’t even want customer address details finding their way into the wrong hands.

But electronic data is just as easy to access, if you know what you’re doing. Which means ditching things like CDs, hard drives and USB sticks in the skip is a really, really bad idea. Especially if there’s confidential data on them. Or if you have so many that they won’t fit in a skip.

Here’s what to do instead…

The thought of letting your frustrations out on redundant technology with a sledge hammer might be appealing. But it’s not especially effective when it comes to securely destroying the electronic data on the hard drive. Just think about all those films where the determined cop salvages a seriously banged up laptop from a crime scene and gets the tech whiz kids in data forensics to extract a juicy clue that leads him (or her, equality fans) to the killer.

The alternative? Get us to degauss that bad boy for you. We use serious powerful electro-magnetic current to wipe out any electronic data so it disappears for good. Then we shred them into miniscule metal chips that even that determined cop couldn’t piece back together. Oh and we recycle them too. Because, you know, the climate crisis.

Talking of shredding, we can do the same with CDs and DVDs. We’ll shred ‘em down to 6mm chips so they’re good for nothing except maybe some sort of edgy mosaic craft project. And again, we’ll recycle them so you don’t have to worry about the environmental impact of your office clear out.

There’s not really anything else to say about this other than it’s suitable for both secure office data and also Celine Dion’s back catalogue. Just saying.

You’d think microfilm and microfiche could be shredded along with paper and it can, to 2mm particles. Unfortunately that is not the safest way to destroy them. The images are too small. Even a thin sliver could reveal more than you’d want it to. That’s why burning – nay, incinerating – these items is the only sure way to ensure no one will ever be able to access the data again.

And before you grab the lighter fuel, it’s worth knowing that microfilm and microfiche burn at over 1000C and release toxic fumes so a) you need specialist equipment and b) you need a licence. We have access to both. Plus we can issue a certificate to say it’s all been done in an environmentally safe way, which is pretty cool.

Other stuff we can destroy

Hmm, let’s see. Magnetic computer back up tapes. X-rays. Documents (don’t get us started on why standard office shredding isn’t good enough). Top secret stuff government stuff (yes, we’ve done work with the MoD and no, we can’t tell you about it – we’ve signed the Official Secrets Acts. Seriously.)

Basically, if you want something to disappear, give us a shout. As long as it’s not your mother-in-law, we can probably help.